Everything is figuroutable in marketing, too

A few years ago, I heard Marie Forleo and her idea that “everything is figuroutable.” When she described this in one of her MarieTV episodes, it was instant recognition.

Because oddly enough, for my entire life, I’ve had a crazy idea that I can do anything. I do mean anything. Even if I’ve never heard of it before, or don’t have an obvious talent for it, or have been told that it can’t be done: I still see a way that I could do it if I wanted to.

So even though Marie was naming it for me, she wasn’t introducing me to something new. I was like “Of course it is, why is she pointing that out?” And then “Oh, crap I can’t believe she came up with such a memorable term for this idea, why didn’t I think of that?” J

This idea seems baked into my DNA. It’s not an attitude adopted because it looked like it could serve me, nor is it a defensive posture against my sometimes too loud critical voices that I’m not enough. I have plenty of both of those. This one is just how I am wired.

Because I’ve always believed I could do anything, the only question I ever had was what I wanted to do. Which I’ll admit isn’t always super easy. It takes me a minute, a few days, or occasionally months to be sure what I want. Anyone else like that?!?

Once I know what I want, and because I have the inner permission telling me I can do it, I set about figuring out the HOW to make it happen. As a child, this meant asking a lot of questions. As a young adult, it meant reading a ton of books and taking classes. Today it means that Google, YouTube, and I are inseparable. In marketing, it means that I’ve studied with many coaches, sat through thousands of articles and YouTube videos, and done a ton of courses.

Does that mean I know everything there is to know about marketing? Not even close.

But I do know this: there is nothing about marketing your business that can’t be figured out. There’s no situation, no circumstance, no amount of inner flaw that somehow only you have that somehow makes your marketing mysterious and un-figuroutable. Nuh-uh.

The only thing standing between you and doing marketing that will take your business to the next level is learning HOW to do it.

Now I’m not saying that to be flip or that it will be easy. There are tons of HOWs in marketing and knowing which will turn on your particular faucet of clients does take some experimentation and efforting. You will stumble, grumble, and outright fail on the path. But not if you don’t get going.

It is the act of learning about, trying on, and refining that helps you figure out what marketing works for your business. It may not always be easy, but it is simple. The info is definitely out there, so go get it. If there’s something in the way of that for you, move it.

A mistake small business owners often make is not getting enough information about their choices and strategically sorting through them before they act. Instead, there is a lot of chasing random ideas, believing that what’s trending is a must, and a lot of sitting in I don’t know what I should do.

In my next article, I talk about four steps to making marketing figuroutable. But first, we must consider the mindset shift that has to occur before you have permission to figure it out.

Here are three mindsets that help find the marketing to build your business:

DROP THE COMPARISON BLUES: Stop constantly comparing yourself to where someone else is and coming out feeling like you’re not where you should be, not good enough, not far enough along, blah, blah, blah. On the spiritual plane, there is no such thing as a comparison. We are all exactly where we should be. Want to go somewhere different? Do it. But you probably won’t if you shackle yourself with this weighty anchor. A comparison should be used for one thing only: to accurately assess where you are and where you want to be. In this grounded state, you can take in how that someone else got there and assess whether they would work for you or not. Starting where you actually gives you all the power of the present moment.

CONFIDENCE COMES FROM ACTING, NOT KNOWING IT AHEAD OF TIME: No one can tell you that it’s going to work out. There are no guarantees. And no amount of sitting around thinking that maybe this will work for you or maybe it won’t will give you an answer. This is a defense that our ego uses to keep us from avoiding the discomfort of change. But it will not give us confidence, but rather drain it. Taking steps toward figuring things out is what gives you confidence. It’s in enacting experiments in our marketing and trying on new behaviors that we learn how strong and capable we really are. Confidence is earned, not gifted.

MAKE IT POSSIBLE: Focus on what could be, rather than on what’s not. Yes, in the comparison step above you got grounded in what is. That’s a needed first step toward moving forward. But then you have to then start looking at what’s possible and what you want. If you constantly look at what you don’t have, or how much further there is to go, it’s defeating. Keep an eye on the long term outcome you are hoping for and be really immersed in just the next step you need to take. A journey of a thousand steps indeed starts with one, but it is a more pleasurable trip if you are musing about the pleasant outcomes at the end and only concerning yourself with the step you are in the act of taking.

Stay tuned for my next article, The Four Steps to Figuroutable Marketing. Until then, know that all the universe is rooting for you to figure it out. 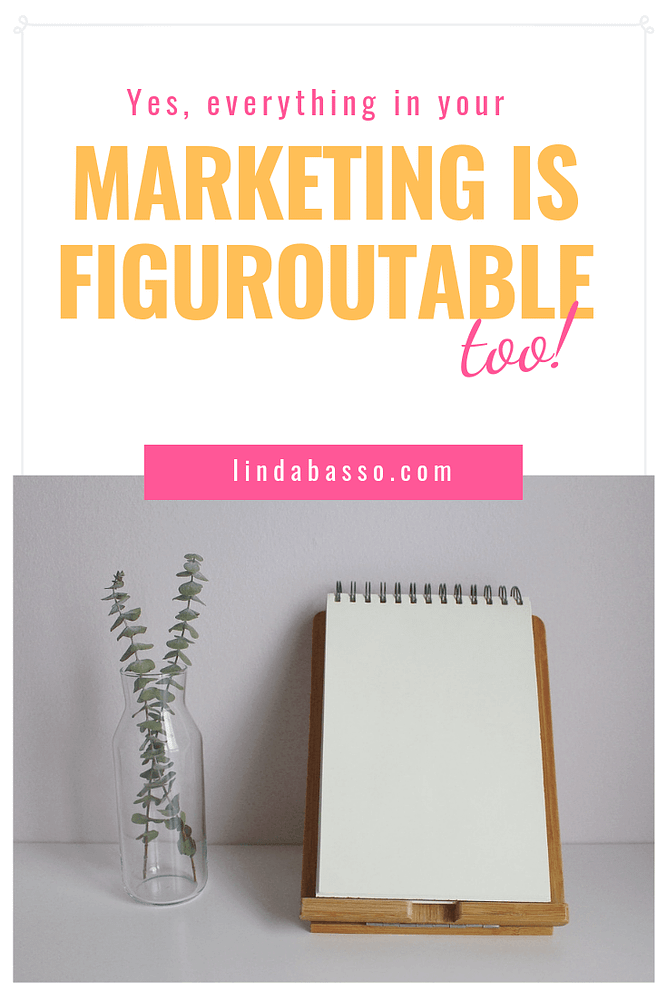 Want the latest on authenticity and growing a business and life you love?

Share your deets and we'll keep you updated with the latest trends!